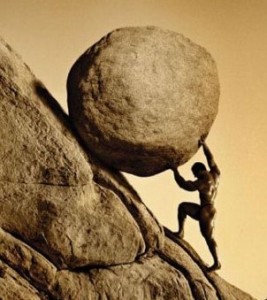 This is the preface to a work-in-progress guide I am writing on weight loss for the morbidly obese. It is entitled “my hopeless struggle” which is a play on the working title of the guide, “A Guide for The Hopeless: Weight Loss and Rebirth for the 300+ Pounders“

Before we dive into the guide proper you might be interested in my path to lose weight. Itâ€™s pretty simple: I was born fat, have always been fat and if my weight were mapped throughout my life it would be an ever increasing plot. My mother is obese and obesity or at least pudginess runs in the family (itâ€™s how our ancestors survived famines and the Black Death in old Europe I guess). My fatherâ€™s family is a mixed bag: some are a bit on the chunky side but there are no hugely overweight people. Growing up I remember constantly being hungry, uncontrolled kitchen grazing and lots of junk food. Bad food habits and habitual overeating was also forwarded by my father, who having been raised by a traditional Italian mother, believed in food as an experience, as a reward and as an expression of affection. My father insisted on always eating more, and the more was often pasta and starches. I was pretty active as a kid â€“ I played outside a lot and on the weekends did â€œmanhuntâ€ and â€œwrestlingâ€ with friends, which was a lot of high intensity sprinting, circuits and stress positions. Compared to peers outside of my circle of friends I was probably less active, as I was and still am interested in technology, gaming, scholarship and craft; yet I would have been considered an athlete in comparison to most of todayâ€™s kids!

Other than a few times in which my pediatric doctors advised me to lose weight by eating less (fat) and exercising more, I was never cognizant of just how big I was becoming. I never weighed myself, did not have access to a full body mirror and was reassured by those around me that I would eventually â€œslim outâ€ as I grew up. Side bar: this is a lie â€“ metabolic disturbances and weight gain you accrue while young will be very difficult to work off later on and parents allowing this are committing child abuse in my opinion. I knew I was fat but not until I began to weigh myself consistently (just in mid-2011) did I realize the depth of the problem.

I had a shit load of medical issues, all of which were complications of my diet and undiagnosed. I would get winded after going up stairs and it took no less than ten minutes to recover. I got shin splints after walking for more than a half mile. My vision was often blurry in the morning after I eat my bagel, cereal and margarine (a sign of diabetes and abnormal blood sugar). I was constantly tired and experienced daily crashes after meals which left me irritable and unable to focus. My skin was dry and flakey. I often developed heat rash in the lower extremities during the summer. Speaking of summer, I could not operate in temperatures over 80 F for very long before become miserable or fatigued. I avoided going to some places because I couldnâ€™t fit physically. My painful activities with the opposite sex were often restricted to the dreaded friendzone. I had tooth decay. My heart would often chug violently and one time I even called an ambulance because I thought I was having a heart attack. Constant heartburn and indigestion. Stomach ulcers. Headaches and withdrawal symptoms whenever I went extended periods without certain foods. My flexibility was horrible â€“ I could not raise my legs very far without experiencing horrible pain and stiffness. I actually could not sleep on my back at one point, as the weight put a lot of pressure on my lower back and made me toss and turn all night. The list goes on and on.

It was for these symptoms, not for my size (which I had trouble perceiving) that I first tried to lose weight. My first attempt in middle school was with Herbalife, a snake oil supplement brand and severe calorie restriction diet that my mother seemingly lost some weight employing (regained later). But I did not have the money for an extended course and my sporadic consumption of the initial one convinced my mother not to further her economic support of that regiment. During high school I was vegetarian and even vegan for a time, and only gained more weight. I tried calculating my energy needs using basal metabolic rate calculators and formulas, and took nutrition and conditioning classes in college, furthering my lifelong interest in medicine, nutrition and conditioning. Itâ€™s indeed an ironic thing to be the most educated person in a room when it comes to medicine, biology and nutrition and yet be the unhealthiest! I experimented with various things but could never find a solution, and when I failed, would become depressed and apathetic. I simply stopped caring and resigned to the seeming impossible situation I was in.

In spring of 2011 I finally got fed up with being fat and started religiously following the common conventions for losing weight and good health and following the nutritional guidelines forwarded by the US government: a lot of whole wheat carbohydrate, a small amount of fat, a relatively small amount of protein, cut out the soda and juice, avoided salt, fruit, decreased my calories to just my basal metabolic rate and increased my physical activity. At one point I was doing an hour of boxing a day and weight lifting on a weekly basis. I tried this regiment for two months. Then the totally incomprehensible happened: I still did not lose any significant weight. The breaking point came when I went to my new and current doctor one day (for an infection in my leg, probably a complication of my obesity), they had to weigh me during processing and my weight was higher than the scale could support, greater than 350 lbs. The last time I had been weighed was in high school and I was 340 or so then, so this alarmed me. I got home, and bought a scale online that could support up to 440 pounds, thinking that I would probably be a few pounds heavier than 350.

The scale came and I weighed myself for the first time in about ten years. I stepped on, the scale creaked and the number flashed onto a vibrant blue LED with big black text. I was 437 pounds. My heart literally sank and I felt like I was just informed of my impending demise. I got dizzy for a second and collapsed on my bed, staring at the ceiling. How did it get to this point? How was I this big? Why didnâ€™t anyone help me? Why didnâ€™t anyone tell me? Why did all those fuckers lie to me? How could I be so stupid? Is the scale broken? How is this possible? All these questions raced through my fat head and I broke out in a sweat. I had always told myself that if I ever got this heavy I would just stop eating or otherwise find a radical solution to get rid of the weight. I vowed then and there, to myself, to go online and find something that would work â€“ because obviously what the government was forking out wasnâ€™t working for me.

The first place I went was the internet forum Sherdog, a mixed martial arts, combat sports and functional conditioning community. I had gone there before to talk about boxing gear I was buying in the months before and knew of the existence of a nutrition sub-section which I had yet browsed. My experience in the other areas of the forum convinced me that they might have some clues on how to lose this heavy burden: the forum was seemingly inhabited by boxers, mixed martial artists, powerlifters, trainers, competitive athletes and other individuals who could demonstrate results. Browsing through the nutrition forum I ran across a few threads focusing on low carbohydrate diets, ketogenic diets and intermittent fasting. A common feature theme in all of these threads was success stories by formerly obese dudes who sounded like they were in a situation similar to mine.Â Reinforcing the anecdotes were scattered links to medical journals and posts by forum â€œauthoritiesâ€ â€“ well respected veteran posters who were personalities in either the sport training or martial art community. I read all of these threads, most of which spanned dozens of pages of discussion, and determined that the ketogenic diet probably had the most starkly contrasting results for the obese. I didnâ€™t read too far into it, or conduct any research, as I figured it was just another nutritional concept which wouldnâ€™t work for me. But as I was depressed and hopeless, I decided to try it out of complete desperation.

So whatâ€™s in a ketogenic diet? This book will cover that, but a grossly simplified definition for sake of conversation would be a diet in which only a small percentage is comprised of carbohydrate, the majority consists of fat and a moderate amount consists of protein. The mechanism is that the body burns its own fat for energy instead of glycogen, the latter of which is converted through a process of carbohydrate metabolism. I didnâ€™t know much more than this basis and the success stories swirling about my head and decided to half-ass it to see if there was any truth to it. I stopped eating all carbohydrates except a few grams in cheese. My miserable diet consisted mainly in deli meats and cheese, some eggs, a lot of water and some peanut butter and a miniscule amount of nuts. Eating in such a manner was miserable but as I weighed myself on a daily basis and began to chart the numbers the amazing happened: I lost 18 pounds in the span of one week. The next week I lost another 15. The weight was literally flying off and whatâ€™s better: I instantly felt transformed. Almost all of aforementioned health woes were gone in the first week or the coming weeks. I felt like I had won the lottery. This diet sucked ass, but I had figured out the essential nutritional configuration necessary for me to lose weight! For those who donâ€™t have the patience to read much further before throwing this guide out: do not fret, the diet we adopt to lose and maintain our weight is wonderfully diverse and delicious, it was just that in my initial exploration of it I did not know what I was doing.

Those glorious bastards on Sherdog were right! A stroke of luck and a desperate gambling leap in the dark had gifted me with a seed of knowledge necessary to begin a more deliberate and exhaustive inquiry into this little known world of nutrition. This guide represents the findings of that inquiry â€“ through personal experimentation, academic surveys and analysis, a retrospective on mainstream and official guidelines, and discussion of philosophies of health. I attempt to distill, offer alternatives to and expand upon the basic plan I have followed to transform my health, lose a huge amount of weight and achieve a more fulfilling life. How did I personally do it?

Forget everything you know about failure. All of that is about to change. All it takes to overcome a hopeless struggle is a push in the right direction and a whiff of the truth. Rather than struggle in self-defeating cycles as I once did, I will reveal the most common configurations which persist to defeat us: in doing so you will triumph over these pitfalls. Letâ€™s kick ass.