To the last, I grapple with thee; From Hell’s heart, I stab at thee; For hate’s sake, I spit my last breath at thee! 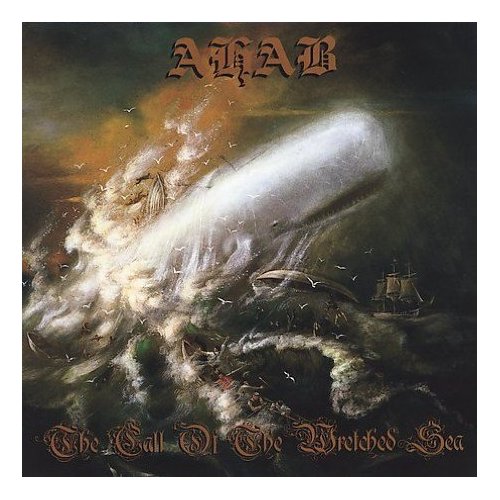 I am truly not sure where to begin with this review. After being mentally mangled from a weekend of perpetual listening to this amazing album I have a sudden urge to take to the high seas and throw harpoons at sperm whales, even if it means my annihilation. Never has music so effectively and convincingly illustrated not only a story but also a feeling of elemental terror and the mysterious wrath of nature.

The Call of the Wretched Sea might as well be the official soundtrack of Melville’s Moby Dick, a story that I was convinced to read after and while listening to this album. Illustrated with surreal precision is the dread of Ahab’s suicide mission to destroy God, his insanity and hatred fueling pagan rituals to damn the souls of his crew with him, the whaling ships deployed into violently churning black seas that so effortlessly crush the breath out of men, the blinding sea salt and the gaping jaws of the white whale.

The story is weaved together by deep, thunderous soundscapes, slow melodic guitars on top of discordant, crushing, depressive rhythms and harsh, incomprehensible, bellowing, deep vocals which are implemented in such a way as to represent the inner thoughts of the mad Ahab and at times the dark, elemental side of nature, namely the guttural spoutings of Moby Dick. The vocals are used as an instrument rather than as narration, underlying every dreary moment of panic to intensify the mood of abyssal hopelessness that Ishmael must have felt on the madness hijacked Pequod. Perhaps the most ingenious use of vocals I have yet to encounter!

At some points during the album the oppressive Doom metal melodies are relieved by beautiful interludes interlaced with wind drowned out samples from Moby Dick (1965), Gregorian chanting, and experimental keyboard and guitar work. These little bits of reprieve contrast magically with the fatal sounding, crushing, mystifying rhythms which permeate the album.