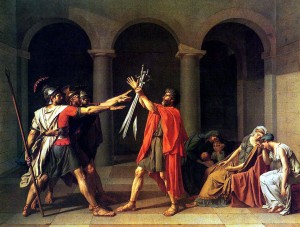 Found a really potent passage while revisiting Pierre Hadot’s Philosophy as a Way of Life which more or less sums up my philosophy of life. The passage, from Philo Judaeus, a first century Jew writing inÂ On the Special Laws, is also arguably the most pithy portrait of not only Stoicism but also the spirit of Hadot’s title.

Note: Paragraphs added – the original text, like all Greek, was one block.

Every person â€“ whether Greek or Barbarian â€“ who is in training for wisdom, leading a blameless, irreproachable life, chooses neither to commit injustice nor return it unto others, but to avoid the company of busybodies, and hold in contempt the places where they spend their time â€“ courts, councils, marketplaces, assemblies â€“ in short, every kind of meeting or reunion of thoughtless people.

As their goal is a life of peace and serenity, they contemplate nature and everything found within her: they attentively explore the earth, the sea, the air, the sky, and every nature found therein. In thought, they accompany the moon, the sun, and the rotations of the other stars, whether fixed or wandering. Their bodies remain on earth, but they give wings to their souls, so that, rising into the ether, they may observe the powers which dwell there, as is fitting for those who have truly become citizens of the world.

Such people consider the whole world as their city, and its citizens are the companions of wisdom; they have received their civic rights from virtue, which has been entrusted with presiding over the universal commonwealth. Thus, filled with every excellence, they are accustomed no longer to take account of physical discomforts or exterior evils, and they train themselves to be indifferent to indifferent things; they are armed against both pleasures and desires, and, in short, they always strive to keep themselves above passions â€¦ they do not give in under the blows of fate, because they have calculated its attacks in advance (for foresight makes easier to bear even the most difficult of the things that happen against our will; since then the mind no longer supposes what happens to be strange and novel, but its perception of them is dulled, as if it had to do with old and worn-out things).

It is obvious that people such as these, who find their joy in virtue, celebrate a festival their whole life long. To be sure, there is only a small number of such people; they are like embers of wisdom kept smouldering in our cities, so that virtue may not be altogether snuffed out and disappear from our race. But if only people everywhere felt the same way as this small number, and became as nature meant for them to be: blameless, irreproachable, and lovers of wisdom, rejoicing in the beautiful just because it is beautiful, and considering that there is no other good besides it â€¦ then our cities would be brimful of happiness. They would know nothing of the things that cause grief and fear, but would be so filled with the causes of joy and well-being that there would be no single moment in which they would not lead a life full of joyful laughter; indeed, the whole cycle of the year would be a festival for them.

Running across little gems like this is why I am a scholar and student in the classics. You will not find such nourishment in our contemporary tracts, which rather fixate on base psychology, suspicion, and nihilism. Still these old words are as true now as then. To echo Marcus Aurelius: everything is as it always was, a familiar procession of the soon to be dead, forever replaced and refreshed in common forms by cyclical nature. Value this fragile but precious existence as the festival it is.

Thanks for your contribution, Mr. Krause. I am fortunate to have discovered this website.

I’m going to dig my copies of Hadot’s books out of a box in the basement now. : D

Hi there Dean. You’re very much in the same situation as Epictetus, who was mercilessly beat by his master until he became lame, his leg mangled. Never stopped him from being a bad ass.

[…] me I learned manliness in an alternative and obscure way. I was innately inspired by reading the classics and the unstated credos and explicit virtues of the epic hero, the trials and tribulations of […]