Today my mother took all the documents from my childhood and gave them to me in a big folder. One of the funny documents was this book report I wrote when I was 10 years old. All spellings and grammar are original. 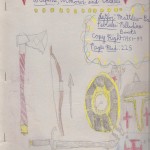 Top center of page has a title “The Compendium of Weapons, Armour and Castles” in script, with rubrications. Surrounded by gold (colored pencil) little bucklers, and two crusaders crosses.

Right top of the cover has a cloud comprised of multi-colored pencil, with script penned text:

The rest of the page has illustrations of: a tomahawk, a bow and arrow, a Hoplon, two crusaders with magneto helmets and a scimitar of some sort.

The bottom has a discrete endorsement, written next to one of the crusaders as if to claim artistic ownership (Comic book style): “Chris Krause.”

Verso of cover is blank.

White computer paper, glued into the construction paper pseudo-spine. A table of contents is page 1:

Hello! My name is Chris Krause and I am presenting my book report on The Compendium of Weapons, Armour and Castles. The talented author whose book sold 10,000 copies is Matthew Balent! Matthew was interested in history so he decided to write a book about weapons, armour and castles that ranged from 250 BC to 1616 which makes a huge grand total of 225 pages! He wrote about the ancient Greeks, Egyptians, Romans, Turkish, Celtic, European, Chinese and Indian civilizations. Matthew’s artists traveled all over the world to draw and scale the great castles and weapons and armour! Even though the book is of reference, there are small stories describing sieges and wars. The book describes war, culture, weapons, castles, armour and major traditional uniform. It also tells about great leaders like Alexander the Great and Cesar. The colorful floor plans of castles the book provides are fascinating! The settings or places of the stories range from Hawaii to China. That’s all over the world! This book took 8 years to complete! You will also be able to read great warriors’ jounals and statements! There are even many more things to do and read in this book!

The main idea is a important thing to talk about in this book because there was so much to think about in the book. Subjects such as armour, weapons, castles, the many civilizations, the civilizations “suit” (the armor and weapons of each period), cultures of the civilizations, floor plans of buildings, journals, poems and stories are discussed. The main mixed idea of it all was for the book to be three things – a reference guide, a study book or a fun fact book. All of these are mostly in the same field but slightly different! The main idea was to teach you about what ancient civilizations used in combat, or as a cultural guide or even a musical guide. Wow – a lot of words! There are many ideas discussed about all the three main subjects in the book.. weapons: such as hafted weapons, knife, miscellaneous, polearms, spear, sword, missel, and guns, armor: mail, plate, laminated, jazeraint, leather, cloth and brigandne Castles: stronghold, keep, castle, hillfort or fort, fortress, city center and fortification! There were also some other main ideas like suits on people, transportation and floor plans. There were many things to learn about in this book including all the subjects previously reviewed! It is important to add this special section so you see all the main ideas.

There were many battles and people in the book. I will talk about Roman warriors or battles that took pace between 250 B.C. and 1616. I liked this story called Greek Fire very much. It describes how the Greek weapon called the “petray” is fired at a tower. The person who wrote the story is called Villehardouin a Roman soldier who was in the tower! He says how the numerous waves of Greek troops storm the castle! He talks about the shots fired from the petray and all the fire and damage that souround him! Although Villehardouin was Roman he wore a Greek war suit and was a rather muscular man. The tower he was in was missed 10 times but on the next shot he was killed, his tower was hit by a bolt from the waves of petray fire and he was left unconscious and after a while died! The castle that was under attack was called Mole Dun’e. Before Villehardouin died he wrote about three other men, all knights – Gauteir d’Ecurey, Elew de’ Lois and Pierre de Courtenay. The Greeks soon blocked off supply routes, troop reinforcement and any advancement of enemy troop, enabling them to capture the castle without losing hardly any troops because of the use of the new weapon the petray! The petray bombarded Roman forces and defenses so they could not advance and have a foot hold over the Romans by destroying the guard towers! This is a example of a great siege – find a weakness and get em where it hurts-. In this case the weaknesses were the guard towers and barracks! The Romans were caught off guard because it was night and because the Greeks got unknown support. The Greeks flanked them from a hill and not from the ground. Excellent tactics I must say! Heres a little story called Rome at War! After the Greeks attacked on Mole Dun’e the Romans had to counterattack on the Greek forts to the east of Rome! So the Romans planted a foward attack post in the city of Salamis. After all the troopers and reinforcements hade arrived and the supplies were there, it was time to strike. The whole Roman senate was thereÂ  – 1.1 million troops! I guess cesar was not happy! They also brought sling shots and billistas… and are now extremely more powerful then the Greek. The Greek had realized this and hade tried to make a peace treaty – cesar did not want this -. Now cesar wanted seven states in Greece, and he will get them he is outraged and is, leding the attack against the Greeks himself!

I think this book was made for the older sort of person because I don’t think any 8 year old would really want to read 225 pages of fact with no funny stuff or big print. For some reason I have always been able to read a lot and I am 10 years old. There is so much logic that a younger person or person that doesn’t have any common sense should not read this book or it’s a waste of $50! I found it interesting and fun and if you have a “older” taste for books, I recommend it. If not, it is very boring! However, if your interested in history like me this book is killer! I can only name one person in my family who might want this book – my cousin Billy who also loves history! I can’t say this is the most popular book but it worked for me!

I had a fun time doing this book report and I have learned much reading my book about ancient times! I have seen weapons, armour and castles! I love history. Prepare yourself. I will probably write another book report on the Civil War so watch out! I wish to continue writing book reports to keep up my grades. Book reports give me the skills to read and write or type better! I am willing to read more and learn more. It is important to read and learn! I will write, do projects, and read through my life many times! I hope you enjoyed my report. Thankyou!

Construction paper insert. Absurdly complicated battle diagram of a battle inspired from the book in question. 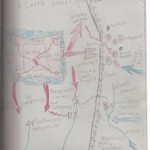 A colored pencil illustration of “Villehardouin IV.” On computer paper. 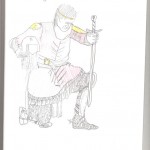 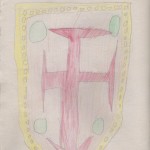 Colored pencil illustration of an escutcheon with a crusader’s cross.

1. I was the only one to use a computer to type up the report, computers were extremely experimental in the public eye during that time, most people didn’t have them and those that did, at least in gradeschool, were considered nerds. We were required to write the report in script. I hated script (and still do) so I asked if I could type the report.

2. I enjoy the constant use of exclamations points and the Napoleonic proclamations throughout; I can just imagine little me enthusiastically shouting about how cool the book is.

3. The synopsis of the two stories are fabricated. I still have the book in question and checked out the source material. The first story is about what is clearly the crusades, and does not include Romans or Greeks. I probably confused myself because the besieging Saracens were using a Greek-derived weapon and just assumed Saracen was synonymous with Greek because I didn’t know who the Saracens were. The summary is all invented by my imagination though. I can’t recall exactly why I did that – probably because I just wanted to write about Greeks and Romans.

4. It’s awesome that I added a “IV” onto Villehardouin without any reason. If I recall correctly I think the report required us to talk about the “main character” of the book. I didn’t read no shitty piece of fiction, clearly these matters were below a general of my stature. Nevertheless I attributed the main character to a random knight cited within my book’s pages.

5. Ending sequence? Eh? Was I trying to sound smart?