My internship was negotiated back starting in September, during which time I was not even signed up or intending to sign up for an internship class. When I was informed that it was required for me to be officially enrolled in an internship class at SLIS by the administration of my site, I found myself to this class. My internship is at Dubai Women’s College in the United Arab Emirates. It is a distance internship, done online. My chief task is to completely develop the college library’s history and education collections on a $5000 and $1000 budget respectively. I have been given complete freedom to develop an annotated list of records to be added and removed from the collection and my immediate supervision is Karla Castle. The scope of both collections is to be appropriate for both ESL Arabs and converting the mostly textbook collection into a proper academic research collection. I am very excited by the amount of freedom and creative leeway which has been afforded to me thus far.

It may surprise you to know that almost all of the staff at the library (including Karla) are from the US, although there are a few Europeans as well. The UAE is taking great efforts to import as much intellectual wealth as possible. Whereas the UAE is a rich country, it has been dependent on foreign intelligenisa thus far to develop their educational infrastructure. I represent the most high tech extension of this exchange, and while it is not a paid internship I am still very excited about helping to develop the UAE’s educational system.

My first thought before beginning work was to create a philosophical scope statement or a series of guidelines to guide my development work, that would be in addition to the basic requirements of the college’s development policy. I had been considering “why” certain records should be included over others for about a month. My final and working guidelines were sketched as follows:

First, #1 is important because the current DWC history collection is for lack of a better word, lacking. It has massive holes in coverage – I was shocked to not find a single record on comprehensive European history while surveying the collection, and the American collection is just a few records, including a biography by Bill Clinton. If the best you can offer in a history collection is a biography of a contemporary president, we are in dire straits! It’s clear to me that the college student body has been woefully malnourished in foreign studies. Karla confirmed this to me in an email, confiding that she did not believe most of the students would be able to locate China on a map! Accordingly #1 calls to create a complete basic history collection, able to at least answer at the basic, primer or reference level the vast majority of all historical inquiries.

#2 is important because the students lack the reasoning skills to wade through controversial materials. I also was trained that most contemporary histories lack rigor and typically fail to meet the standards we historians demand of histories; you can’t really create a history of a recent event, it’s too recent, and all the data is not available. Furthermore, the budget did not allow for records of this sort – my intention was always to get “the most bang for the buck.” While $5000 may seem like a nice budget for many of the libraries the reader may have worked with, it’s quite a small sum for a library collection which is virtually empty and needs to be built from the ground up.

#3. Again, here is the idea that we need to be able to cover the full scope of history, pre-history to 20th century. Reference works are more amenable to the ESL student, than intellectually challenging secondary works.

#4. Every library should be able to study it’s own region in my mind. Europe and Asia are essential places to study for Arabs, because those lands have had a major role in the history of their land.

While not part of the foundation development criteria, I also am constantly considering the ideological slant of works. It must be kept in mind that the great number of histories giving treatment to the near east are prone to Orientalism. Orientalism is a concept developed by Edward Said during the late 1970s and was a ground breaking revelation in history writing. Said found and demonstrated that the vast majority of works concerning the region were racist, filled with stereotypes and contained premises and depictions often based on ethoncentric assumptions and ignorances. While Orientalism in history writing reduced in recent decades, it saw a resurgence during the “War on Terror” – and as might be suspected, is married to political climates. Again I caution the reader to avoid contemporary histories for reasons just as this. So it is always in my mind to avoid works which promote what Said would describe as Orientalism. While it is important to avoid in Western collections, I would feel sick to my stomach if I knew I was responsible for delivering racist propganda to Arab readers.

So what is a typical day “at work” for me? Well for one, it’s done from my home. I typically schedule days of the week that I will work; I don’t have to “clock in” every day, I just need to complete the project by some internal deadlines that Karla and myself have agreed to. I tend to work for entire days at a time rather than spread out the work through the week. A work session involves a comfy leather chair, my computer, some metal or classical music, sealing myself in my study and two primary digital tools: Bowker’s Book Analysis and Bowker’s Global Books in Print.

Bowker’s Book Analysis is a wonderful resource. It compares a library collection against a “core list” of works. My day of work starts with opening up Bowker’s Book Analysis, selecting DWC and “resources for College Libraries” core works list. I proceed to filter out “any audience” works and focus my search to lower and upper undergraduate collections. I then send a query filtered into Dewey categories (LC is also available, I just find that Dewey more easily sorts the records for my purposes). From all the Dewey sections I further refine my search to focus on 9xx works only (900 is Dewey for history). What is returned is as referenced in figure 1.

The second column is “core titles in library”, the third is “core titles” and the third is “percent of core titles currently held.” From this view I can appraise the general condition and status of the collection in an interactive form. Some huge gaps in coverage become obvious quickly. As I work I mentally attempt to estimate how much funds i’m going to use on each section, and begin to think about the entire course and scope of history, going from geographical region to region in my mind, asking “do I have a record to cover this area yet?”

Collection development begins with delving into the list of core items currently not held in the library and going through them one by one to locate some economic gems (reference figure 2). I consider price, scope of content and quality – seeking works which are affordable, cover the most ground in a sound academic fashion and are well reviewed. For this latter qualification I tend to use Amazon reviews and Google to locate peer-reviewed analyses. When I find a record which I suspect might be worth adding, just from the title, or from an author whom I recongize, I have to stop and make sure the reviews are good. I also commonly use the Amazon “browse” function to look in the table of contents and skim through the record, using my background as a historian to provisionally judge the quality of a work. Once i’m certain that a record will do good in the collection I keep skimming, clicking the next page until I have gone through dozens of pages of records.

In some places I make concessions for price; I am not always want to select the cheapest records. I made a point to buy several high quality atlases which were pricey after I digested Karla’s comment about the students not knowing where China is. I also made a note to buy a series of very expensive world history reference encyclopedias. One set was $650, more than a tenth of the budget! However, the scope of the set was invaluable: covering all world history from pre-historic times to the present, and at a reference level. Such a set would be of great service to the college population and would fill gaps that would still inevitably remain after my development was complete.

My work is a mixture of pain and delight. For one, it pains me to have to consciously decide not to cover a topic in depth with a particular record because the budget is lacking. There are very few ocassions in which I selected records which offer specific coverage of a topic; “a concise history of the middle east” takes precedence over a $80 tome on the complete history of Jordan. I would love to include such works in the library collection, but I also have a responsibility of ensuring complete historical coverage. If a student has a question and is unable to answer it with at least one record in the library, I have failed. While I would prefer to select Cambridge histories, which I consider to be more or less authoritative, their limited scope and notable price has prohibited their purchase.

For me the work is more a mental challenge rather than the tedium you might expect. I have to constantly be reviewing my entire knowledge of history and glancing over the world map on my wall (Which is, quite in the spirit of my nerdiness, an etymological political map), arguing with myself and interrogating my knowledge of the past to wade through an ocean of records. I mentioned before that the work was a mixture of pain and delight, and here is where the delight comes in. It is a joy to recall all the names of historians from my undergraduate years, as if revisiting an old friend. To have the confidence of knowing where all those works fit into a greater schema of knowledge is also rewarding. As a historian myself, I quite enjoy skimming through various history books. I am constantly cognizant of the effect the development will have on historical studies at the college, and it is an invigorating experience to be at the fore of modernization.

Once I find a record worth adding to the collection I dump the details into a word document. My plan is to eventually convert this document to a spreadsheet so I can easily remove items and tally the total expenditure in a more systematic fashion. I divide the word document into Dewey sections so I can mentally keep track of what records are used to cover each area of history. As of this writing I just have the Americas to cover, something I am going to try to accomplish with $300 or less. Most of the funds have been focused on ancient and regional histories of Asia, Europe, Africa and especially the Middle East. 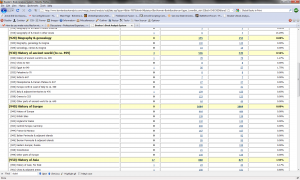 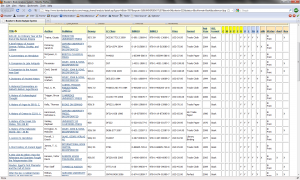