I recently got back into boxing and wanted to share some thoughts for people who are considering getting into the game. My interest in boxing stems from my recreational study of martial arts, which started when I was still in elementary school and turned into quite a hobby by the time I was in high school. During my earliest years karate had an explosion in the United States and it seemed like karate studios were opening everywhere. I was not interested in such nonsense, the styles seemed ineffectual and memorizing some katas to be given a belt without qualifying one’s fighting ability seemed ostentatious at best. Regardless, I became a huge fan of Sanda, Muay Thai and eventually Sambo, Brazilian Jiu Jitsu and Judo. I used to watch the K-1 tournaments all the time with my best friend, and from there eventually started watching PRIDE and Pancrase championships, which were the precursors of such giants such American inventions as UFC. I consider combat to be the greatest sport of all, and there is no greater test of an athlete’s character and ability. It was especially interesting to examine what was effective, and what was not. Karate and Tae Kwon Do were especially unsuitable for real combat, while it seemed the boxers (be they Thai or Western) dominated the field. Eventually I bought some gloves and Thai pads and from time to time would work them with my friend, but he soon had to move away to school or otherwise was physically distant and I fell out of practice for about three years.

Fast forward to now, and i’m pretty tired of being a fat ass. It’s not even being a fat ass that is the issue, but just not being a warrior, and not having complete mastery of the body. As the Stoics might remind us, we are not in control of our bodies, or anything else but our actions and thoughts for that matter, but that doesn’t mean that we should allow our body to degenerate out of neglect. While I have a disdain for appearances in general, it was time to get back into boxing and to make it a permanent fixture of my life in order to realize my ability. To understand what I did next, you must first understand an epic failing I had made a few years prior.

I had wanted to hang a banana bag, a special long punching bag designed for Thai kick boxing. So I bought a bag off the internet, but didn’t realize it didn’t come pre-filled. My solution was to go down to the water and fill it with sand. Not realizing how truly heavy it was, I dragged it into a friend’s car after much struggling and brought it home, sliding it into the house and down the stairs to my basement. Well, there were a number of problems here which I didn’t realize until we had hung the damn thing:

So, the thing remained unused, in a sad, slouched over position for years on end. I always said I would get it out of the basement and hang it elsewhere, but I kept procrastinating. The first step to getting into boxing properly would be to get rid of that annoying thorn. I eventually said “fuck it” and went downstairs. I tried to pull it up the stairs, and was able to get it about a quarter of the way when I realized if I kept pulling with such torsion, the stairs would break. My arms were also quite dead from dragging a 300 lb bag across the entire floor. So it stayed in the basement for another week while I thought about how I was going to get it out. I finally decided I was going to get it out by scooping the sand out, shovel by shovel. My plan was to put about 20-25 lbs of sand in a series of garbage bags (No buckets available of course). So back into the basement I went, with a half-broken spade shovel I had found laying around the yard. After a series of exhausting squats and 2 hours of shoveling I had about 10 garbage bags filled with sand. Though my legs trembled it was now time to drag those bags up the stairs. I found a cart nearby and loaded a few bags, which were much heavier than 25 lbs each onto a yellow cart used for holding tools. The first trip went well with a lot of screaming, essentially dead lifting 100 lbs of sand up an incline while walking. On the 2nd trip I tried to move a bag of sand and it split open. The sand was filled with rocks and small pieces of glass, and the bags were not tested to hold such weight. Joyous! OH and it wasn’t the first, another one did as well. Running back up to the stairs to grab a dust pan, and more shoveling. 2 trips later and the sands outside. My final trip to the street was with the gnarled bag itself, which still had about 50 lbs of sand in it. It was a religious experience to finally throw that thing to the curb. While I had originally planned to salvage it and hang it from a basketball hoop in the yard, I had seen enough of its mocking, black visage and now intended to buy a new bag.

Back to boxing, but new to boxing

With that mess cleaned up I bought a stand and 100 lb heavy bag bundle from Walmart. I made sure that the bag came pre-filled, and that I would be able to assemble the stand. I didn’t want a repeat of yesteryear’s fiasco. Within a week both items, the bag and stand, had arrived. With some help from my friend James I got it assembled and good to go. I deployed it outside, in a driveway which connects to our back yard which is not in use. 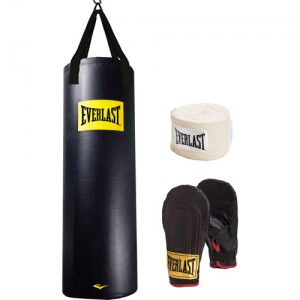 Equipment wise I used my old 20 ounce Everlast gloves and the 108” hand wraps which came with the bag as a bundle. No ankle support, although I probably should invest in that seeing as I injured my right ankle doing calf raises some years ago and it constantly hurts. I had no idea how to wrap my hands, so I looked on youtube. A lot of people had videos showing how to wrap hands using 180” “Mexican” wraps, but not the 108” ones which came with the bag. I found one video, but it was pretty crappy, and I couldn’t follow it, so I just sort of half-ass wrapped, focusing on the knuckles and wrist. And of course I brought out a 20 ounce water bottle, it’s essential to keep hydrated when you box, otherwise you will gas artificially quick and feel sick afterward.

The first time I boxed my entire body hurt and I gassed in about 10 minutes, although I forced myself through 20 minutes. Significant pain was in my lower back, which of course was unaccustomed to the sort of slipping a boxer must do when throwing powerful punches. I did basic jab cross combos, with a few hooks thrown in for good measure. Recouping in the house, I took my wraps off and found my hands visibly shaking. A good sign, this means that all the tendons and muscles in your hand are exhausted and got worked. I also found that I had a significant “pump” in the triceps and deltoids, good stuff.

The next session was pretty much the same thing, but I found it difficult to concentrate, although the workout was amazing as the first. Huffing and puffing, I barely made it into the house. At that point I had no weather protection for the bag, and the forecast said it would rain the next day.Â  So I took a ride to Home Depot with trusted homeboy James and purchased a heavy duty tarp. I also needed to buy some bags of sand. Why do you ask would I concern myself with such devilry once again? Well, the stand needs to be weighed down otherwise it rocks back and forth, and I was unable to punch as hard as I wanted to. While there are spokes on the stand for plates to weigh it down, there was no way i was going to spend $100+ on plates I would not use except as dead weight. One review on Walmart said he bought construction sand to weigh his stand down, so I would do the same. Back to my house with the loot, the sand bags worked EXACTLY as intended and eliminated all rocking, and at the measly cost of $15.

One problem: the tarp kept blowing off. I’d find the bag in the morning bare and exposed to the elements. My brother had the bright idea of using some webbing in the garage that was intended for a patio set we had since got rid of years ago. This worked great, and although the webbing disintegrates quickly and was not designed for the friction of securing it tightly, I have an entire bag of the stuff.Â  Now my material needs to work the heavy bag were complete and I could fully devote my attention to the task of boxing. Total price to get everything set up was approximately $210.

One reply on “The New Pugilist: Part 1”

Good luck with that!