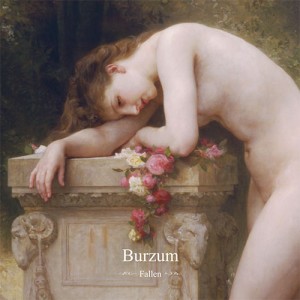 It was much to my pleasant surprise that I learned of Fallen from an acquaintance. I had followed the rebirth of Burzum closely and listened to and studied Belus but had fallen out of current developments in recent months. While I thought Belus was a good album, it just didn’t compare to the majesty and spiritual power of an album like Filosofem. That being said, Fallen is a return to more introspective, emotionally charged and philosophical works of yore, but still remains married to a deep concept of Indo-European mythological themes.Â  I think this is the perfect area for Burzum, as was shown in Filosofem, and where Varg Vikernes really excels creatively. While Belus was essentially a story telling album, a celebration in Nordic mythological concepts, it in some ways was lacking in pure emotional immediacy and technical experimentation, instead sounding like an imitation of the earliest Burzum forms. And who can blame Varg? Being restricted from his music for so long, I’m sure the psychic chorus of sound in his jailed mind naturally was an outgrowth of musics from fifteen years ago, and much like a debater finding a clear hole in an opponent’s argument, he could not wait to spit out the thing burning at his chest.

I’m glad to say that Fallen is more experimental and is one of the best metal albums I have heard in a long time. Indeed the album is quickly becoming a favorite, and I’ll often find myself leaving it on repeat for hours on end. The sound of Fallen is a synthesis of the most primitive Burzum forms, with a good dose of Filosofem thrown in for good measure in the form of emotionalism, and a new element of folksy, almost punk-like vocals and riffing. Essentially this album combines everything I like about the spectrum of black metal; if Falkenbach and Filosofem-era Burzum had a bastard child, this would be the result. The most significant technical innovation is the introduction of clean vocals. While in the past Burzum had some rare clean vocal moments they are more common in Fallen. Varg’s clean vocal style is in the form of a musical spoken word which reminds me in some ways of a blackened army ballad. Surely this new feature of Burzum is going to turn off some black metal purists, especially those who subscribe to a school of thought which demands brutality and violence. Personally I love the introduction of such vocals, and the memorizing guitar riffing which accompany them. I honestly think this is arguably the best Burzum album.

One way in which Fallen is lacking is in it’s instrumental tracks: an introduction and conclusion. The introduction is not an essential instrumental track but instead a series of chants through the ether that last about a minute. That’s fine to establish the album ambiance, although it may be a bit gratuitous. However the concluding track is a full fledged instrumental, and just doesn’t captivate me. It sounds like a Neurosis track, complete with slow Beat poet style drumming, whispering and random string plucking noises – which I think is fine for Neurosis but sounds very out of place on a Burzum album. It is especially out of place on Fallen and does not have any semblance to the tracks which precede it. While I was able to loop Rundgang Um Die Transzendentale SÃ¤ule Der SingularitÃ¤t for hours on end and find myself in a deep, metaphysical trance (that’s when you know it’s good black metal), Til Hel og tilbake igjen is interesting but ultimately fails to have any psychic effect.

Another gripe with the album, although understandable, is the lack of English vocals. I understand Varg’s reasons for wanting to use his native tongue, and I can’t fault him for it, but it doesn’t change the fact that this would probably be my favorite album of all time if it was in English. I’m big on lyrics and often enjoy them as much as I do the rest of the music. Unfortunately with Fallen and the preceding Belus an effort must be made to read the translated lyrics and also learn or at least toy with some Norwegian.